This Is Way Cooler Than Your Regular Gym Bag

My husband is not a big fan of rolling luggage. We have some and he uses it when he needs to, but he tends to gravitate toward duffel bags rather than the spinners because he doesn’t like pulling the rollers behind him. He’s really tall, and sometimes the handles on suitcases are not long enough for him to comfortably pull. I, on the other hand, am 5 foot 2 inches on a tall day, and there is never any question as to whether I will be able to reach a bag handle. I hate carrying bags because I’m so short, and I sometimes have trouble with them actually hitting the floor when I’m trying to carry them. Yeah, being small is super fun! 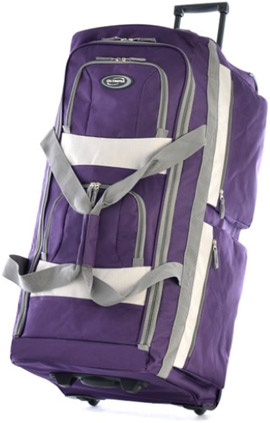 Anyway, a bag that is small enough to be easily carried by a tall person, but can also be pulled by a vertically challenged individual would be a happy medium for my husband and me. We rarely share bags when we travel, but I have gotten tired of having two different sets of luggage to support what we both need.

The Olympia Luggage 8 Pocket Rolling Duffel Bag is a really good solution in that it’s versatile enough for both our needs. It comes in black, blue and red, and looks like a duffel when it’s laying on its back or a standard rolling luggage piece when it’s upright.
It’s pretty versatile as far as size is concerned, and it comes in 22 inches through to 26, 29 and 33 inches.

More A Gym Bag Than A Business Bag

This isn’t the kind of luggage you’re going to use for business trips because it doesn’t have the refined look business luggage has. For family trips or tossing things in the car, the look is fine. It sports plenty of pockets so you can organize all of the different things you have, and it works well if you’re like me and can only think when you’re super organized.

One of the biggest drawbacks of the case is that it isn’t sturdy enough to stand up on its own without someone balancing it from the back. Though it has the ability to be wheeled upright, when you’re done actively moving it you have to either lay it down or balance it against something.

Wheels On A Chalkboard

This is not a piece for the stealth walkers in the crowd. More than a few people have noted that the wheels on this bag are noisier than typical spinners that come on more modern luggage.
Personally I’ve never had a problem with the rolling sounds of wheeled luggage, but this might be the kind of thing that will be super irritating once it’s pointed out.

I Think It’s Worth The Price

To be fair, a little bit of noise from the wheels is not a terrible fate if you consider the price of the bag. The small duffle runs just under $30 which I think is a good deal considering how versatile it is, and its 29″ brother only adds about $15 to that. It may not be the sturdiest bag on the market, but you usually get what you pay for. Bags in this price range usually give you way less than this, so I think that you’re actually getting even more than you paid for with the Pocket Rolling Duffle.

Not The Right Size

One of the most frustrating parts of the bag is that it’s just large enough so it can’t be used as a carryon for an airplane. Again, most of the trips my husband and I take are in the car so it’s not a problem, but I think I would be annoyed if I had to pay to check a bag because this one is just one or two inches too big. However, that doesn’t mean you won’t be able to “carry” it on to some airlines if you don’t over pack. This is because it’s pretty flexible, so be sure to measure if beforehand.

Overall, people with realistic expectations really seem to like the bag, and I think it would work for my husband and me. I have to say though, the “tipping” issue might well end up being an annoyance for me. Other than that, for casual travel without a lot of heavy things in tow, the versatility and size of the bag would probably fit my needs, his needs or both pretty well.