Do The Duffle Shuffle

Sometimes, spending a lot of money on luggage isn’t the best solution. It seems logical that you get what you pay for, but there are a lot of cases where, if you’re low-key like me, something that’s cheap and sturdy enough will do. I don’t always need the best of everything because I’m pretty happy with things that do the job without a whole lot of bells and whistles.

I wanted to look for a large bag that’s good enough to throw in the car for a weekend, and not worry about it getting damaged on the trip. I’m not necessarily looking for a bag that can be used for long plane trips but instead, something that’s suitable if I head out of town for the weekend. Unlike some, I don’t need a whole lot of fanciness. I just need something to keep my stuff together on the drive there. 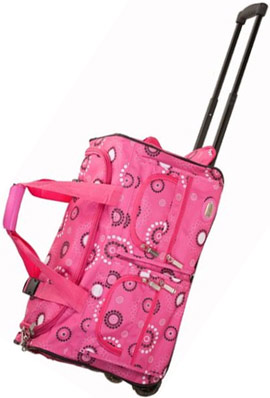 Rockland makes a 22″ rolling duffle bag that’s just that. It won’t hang your clothes, but it will give you plenty of places to put your belongings for a weekend away. Plus, you won’t need to lug it around on your shoulder (although, if you fancy a workout you have the option). It has wheels that come on roller blades and skates so it can glide behind you, but it won’t move upright like bags with spinner wheels do.

One of the best things about this bag is that it’s by no means a one size fits all product. Okay, it only comes in one size, but it comes in just about every color and print imaginable. Seriously! You can go with basic black if you want, but why would you? Aside from black, you can choose from animal prints, plenty of girly colors, and of course “manly” shades with the odd camouflage thrown in. Actually, there are no less than 33 designs to choose from so there should be something to suit any taste.

This bag has tons of room inside its 22-inch frame. It can hold up to two weeks’ worth of clothes depending on what you pack. The size is just big enough that it probably won’t go in an overhead, so don’t expect to be able to take it on a plane with you. Instead, it will have to be checked.

The Pluses and Minuses for Your Money

As I’ve already mentioned you get wheels included with this duffle bag, and they’ve been designed with “big” in mind. It also includes a heavy duty zipper, and both of these features are met with approving appraisals. However, if the bag is used often these tend to be the first things that fail.

There have also been complaints about the fabric ripping around the zipper and near the wheels, but this could be due to over-stuffing or the fact this bag doesn’t cost you an “arm and a leg”! On the upside, you also get a retractable handle which, in my opinion, is a welcome feature in this price range.

Many bags like this that are shipped to customers have a strong, plastic like smell when they’re taken out of the box. They don’t have the luxury of airing out while on a shelf at a store, so the manufacturing smells stay on the bag and it doesn’t have the chance to dissipate. The 22-inch duffle has a similar problem, and it can be pretty strong – unless you make sure you have time to properly air it, or opt for that trusty Febreeze!

Get What You Pay For

OK, so there are issues for some with failing wheels and zippers as well as ripped fabric. However, the manufacturer is offering a duffle bag with some added “roll-case” features you more than likely won’t find elsewhere.

I have to be honest (as I always am) and tell you this bag isn’t made for heavy duty travel. That being said, a bright, cheerful and girly (or dark colored manly) bag for $30 that will be used strictly for weekend trips might not be a terrible idea. You shouldn’t expect $100 worth of quality, but I think it’s worth the price tag if you only need it for occasional travel. 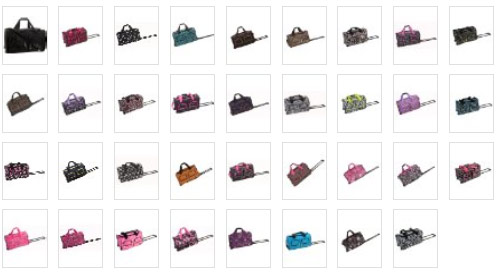