Can You Have Quality Without A Huge Price Tag?

The more I look into luggage, the more nervous I become about investing in a set. Obviously, there are great pieces out there, and a lot of people use them. Some people swear by certain sets, while other people report the same ones fell apart on their first use. This isn’t necessarily what puts me off buying a more expensive set of luggage, it’s just that I can’t seem to shake the “cheap skate” in me!

That’s why I’ve been gravitating back towards less expensive sets. I have this image in my head of getting on the one plane with a broken overhead compartment near where I’m sitting. The flight attendant comes over to tell me there’s no room, and the expensive bag I’ve kept in my sights all the time is whisked away. Now I have no control over whether or not it’s going to remain in one piece, and the people who are putting it in the baggage area aren’t going to try to keep it safe like I’ve attempted to.

Obviously, that’s a strange hypothetical, but I have been in a situation before where my suitcase ended up checked when I wanted to use it as a carry on. This may be backward thinking, but I am wondering if it’s better to just go back to the less expensive sets I’ve used before because I won’t be upset or out a lot of money if they get damaged. (Or is this just one big excuse, and I’m still trying to hide that “penny pincher)! 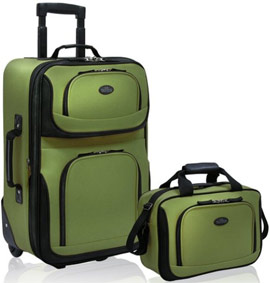 Sets You Up To Relax

The US Traveler Rio Two Piece Expandable Carry-On Luggage Set is a less expensive option that could fit the bill of “luggage that can get beat up if necessary.” At just under $50, I wouldn’t be heartbroken if one of them got damaged.

The set includes two pieces, both of which are carryon size. The larger bag sports an older two wheeled mechanism for rolling, and the smaller one is a basic tote that can hold small things like computers and toiletries. The inside of the larger bag has straps to hold down things that need to stay in place, and the exterior is made of polyester that can be spot-cleaned if necessary.

The Rio Two-Piece Set comes in four colors, but none of them are particularly subdued. If you’re looking for luggage that will blend in, this may not be the set for you. The options are green, orange, purple or royal blue. On the upside, all of them (obviously) are easy to find should they have to be retrieved at baggage claim, but on the downside none of them look particularly business-like.

Despite the low price, the convenience factor of this set is pretty stellar. The small bag has a fabric piece on the back that slides onto the expandable handle of the larger bag so they can be pushed together. If you have to move quickly through an airport or you have other things to carry, that’s a pretty handy feature!

Not Always Set For Size

One situation where this may end up out of my possession and into the baggage area is if the bag gets overstuffed and has to be expanded. Once it’s full beyond the capacity of the non-expanded bags, it won’t be able to sit in some of the available overhead compartments any longer.

Set For A While… Alone

The set also has a common problem that can happen with bags that are shipped and not purchased from a store. Bags that are delivered to you often don’t have time to air out after being manufactured and placed in protective plastic bags. This means that when they come out of the box after purchase, they can still hold the smell of the factory or the protective chemicals that were put on the bag. However, this problem is easily dealt with as long as you air them before use.

A Set to Snap

One point I feel I must make is a possible issue with the retractable handle. There are two lengths, one that’s long enough so a child can use it, and one adult length. However, (and this is probably one of the reasons the luggage is such a good bargain) be careful when you use it. The handle isn’t the sturdiest part of the bag, and can easily snap or wobble if it’s “handled” roughly.

Set For Another Time

While the cheap side of me wants to stick with inexpensive options, I’m thinking it’s time to really invest in slightly higher quality items (but that’s just me)! If you only travel very occasionally, and when you do there is no need to take a lot of stuff, I think this luggage is worth the money.